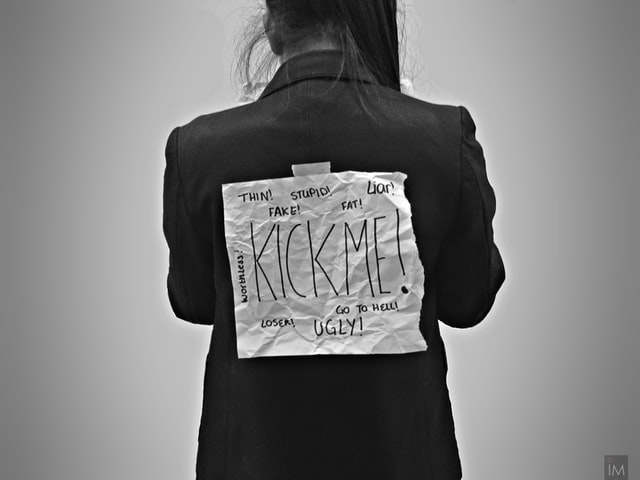 Are you aware that name calling is the number one form of bullying? It is even more common than physical or emotional bullying. Unfortunately we all seem to engage in it on a regular basis. In my own case, I was constantly called “Twitch,” “Shaky,” or “Rabbit” because of my tics from Tourette’s, which had not even been diagnosed yet at the time. Being short and very heavily muscled led to names like “A human fire hydrant” or “No neck”.

You might even be tempted to think that teaching your child not to engage in name calling should be intuitive. But you would be surprised at how many parents I have seen use language that would embarrass a sailor with Tourette’s in front of their three and four year olds. Then a few years later, much to their horror, they hear their seven and eight year olds using the same language. A lot of the time it happens right in front of friends or guests. Then you are left feeling extremely embarrassed.

DON’T engage in name-calling yourself, especially in front of your child. You’ve no doubt heard the playground rhyme, “Sticks and stones can break my bones, but words can never hurt me.” No kid believes this. Sometimes words are actions. Do you remember a time in school when someone called you a name that embarrassed you in front of your friends? Maybe it was a racial slur. There are any number of medical conditions that might make someone a target for name-calling because they stand out.

Children do not engage in verbal bullying without having heard it somewhere, most likely at home. Don’t think it starts at home? Surely, you have been in a car with your child in the passenger seat when another driver did something that angered you. Did you yell at the other person? Did you use a racial epithet? If it was a female driver, did you insult her for being a woman? Of course, you did not mean to teach your child to be verbally abusive. In fact, you probably have corrected your child more than once for name-calling. But that is exactly what you just did? Without intending to, you just taught your child that when you correct them for doing it, it must still be OK since Mom or Dad are continuing to do it.

Worse, you just taught your child to be verbally abusive. Your behavior is more powerful than what you tell your child is right. Children are parrots. They mimic your words—and your behavior. Imagine how you would feel if you overheard your child referring to someone in a wheelchair or on crutches as “Crip,” or another person as “Fag,” “Lezzbo,” “Whore,” or “Slut.” I catch myself sometimes, wondering if there might be some truth to the nickname. And then I have to ask myself, “How do I know it is true?” The simple truth is that I don’t. Even if it is true, how did I get the right to intentionally humiliate individuals because they aren’t like me?

I then have to tell myself that life would be quite dull if we were all the same. The best way to make sure that my child does not pick up the habit of name-calling is for me to not do it in the first place. Granted, it’s not that easy when somebody does something you perceive to be stupid and dangerous. Still, two wrongs do not make a right. And in that instance, I am not just letting off steam. I’m teaching my daughter the wrong thing.

Administrators and teachers have learned that, not only do words hurt, they often escalate into a physical conflict that envelops the school, the bully, and the victim as well as those around them; this includes adults and other children who may get caught in the crossfire. Words are often the first step toward a confrontation becoming violent. The first attack is psychological, which then escalates into violence. This is why we need to teach our children how to refrain from name-calling. There is nothing good that can come from it. Because of all of the pressure that children face in today’s world, it is very easy for name-calling to quickly spiral out of control and become physical. This is the main reason it is so important for us to teach our children how to avoid becoming the target of bullies.